Post and rail is a generic term used to describe a fencing system that uses a solid timber post with horizontal rails fastened between the posts. Sturdy post and rail fencing is a very simple, effective and easily installed style of open fencing. It’s strong and can serve as a perimeter enclosure for long stretches of property, roadway or agricultural land and livestock.

Post and rail fencing can be used to provide demarcation of smaller areas of land or gardens, or protection for features such as flowerbeds or young trees, while still allowing open views. Post and rail can also be combined with wire mesh, chainlink or barbed wire to provide an open but secure fencing system for agricultural applications.

Post and rail fencing is constructed either with morticed fence posts with fence rails simply slotted into the mortices, or with solid fence posts with fence rails nailed onto the posts. This method of fence construction makes it ideal for a run of fencing where the ground is sloping or uneven. As the posts are all inserted at the same height from the ground, the rails can follow the slope of the land between each set of posts.

Morticed fence posts will commonly have two sets of adjacent holes, so that the rail to either side of the post can be fully inserted for a secure fit. Mortice posts are usually designed to house two, three or five rows of rails. 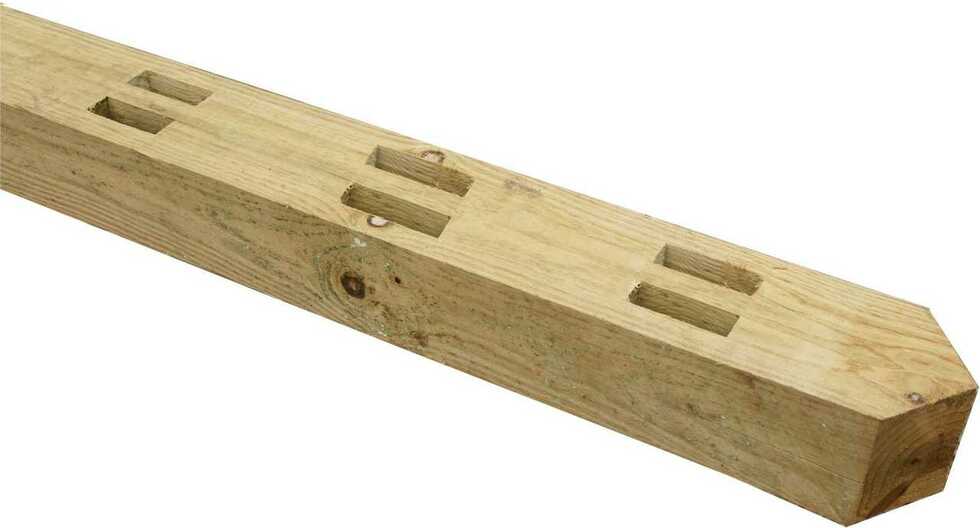 Do I need to concrete in my post and rail fence?

Post and rail fencing can normally be erected using the back fill method i.e. the hole is dug, fence post positioned then the spoil from the hole is back filled and rammed down to secure the post. If using a pointed fence post the post can be rammed straight into the ground, either using a manual  post rammer or a petrol post rammer (which can be hired).

However if the ground is particularly soft, or the fence will need to withstand significant force, then it may be appropriate to concrete in your fence posts.

Chestnut cleft fencing, otherwise known as Sussex Rail, is one of AVS's top-sellers, and the components we supply are primarily sourced and cut locally in Kent or Sussex coppices. This means the timber re-grows for future harvesting and hence is a sustainable and environmentally friendly choice. Because chestnut is naturally a very hardy and strong timber it can be used for fencing without the need for treating.

Chestnut cleft fence rails are essentially a split log sold in a 9' 6” length with the ends pre-shaped to fit into the post mortices. The rails simply slot into morticed cleft chestnut posts, or alternatively morticed square timber posts. Cleft posts are usually half round chestnut logs, irregular in shape and diameters and pre morticed with side-by-side mortices. The manufacturing method of the cleft rail and posts means that they retain a face with bark initially intact, adding to the fence's rustic appeal. 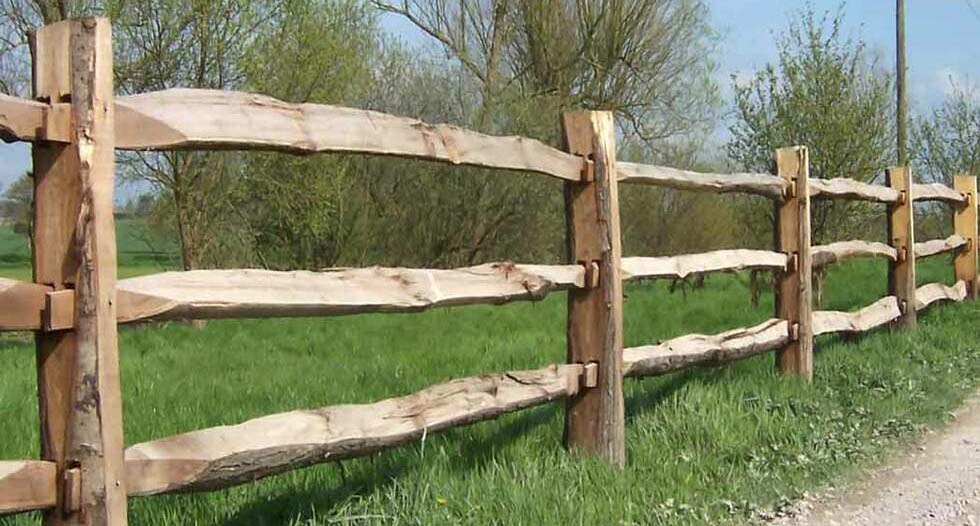 Top tip - the cleft rail should be used with the bark side down, so the split side is on the top.

Square cut and half round post and rail fencing

Square cut post and rail fencing, or motorway rail, refers to any type of post and rail whose rails and posts are rectangular. This system is normally more cost effective than cleft and has a cleaner appearance preferred by some.

When the fence is erected the rails are simply nailed to intermediate posts, which are set at 1.8m intervals, or fitted into morticed square fence posts.

Another method is to have the posts set at 3.6m centres, with a pricker post in the centre of the bay. A pricker post is usually made from the same material as the rail, pointed and driven into the ground with the rails nailed to it. This acts as a support but also stops the rails from bowing, distributing any external force throughout the fence.

With this variation of fence system it's also possible to have the posts pre-pointed so that they can be driven into the ground during construction, making the job much quicker to complete.

Half round is similar in componentry to square cut, but the rails are half-round and the posts are either round or half-round (or even square). Rails are nailed into position, giving a sturdy fence with a more rustic, natural finish than square cut.

Top tip - the wider the post, the more area you have to secure the rails. 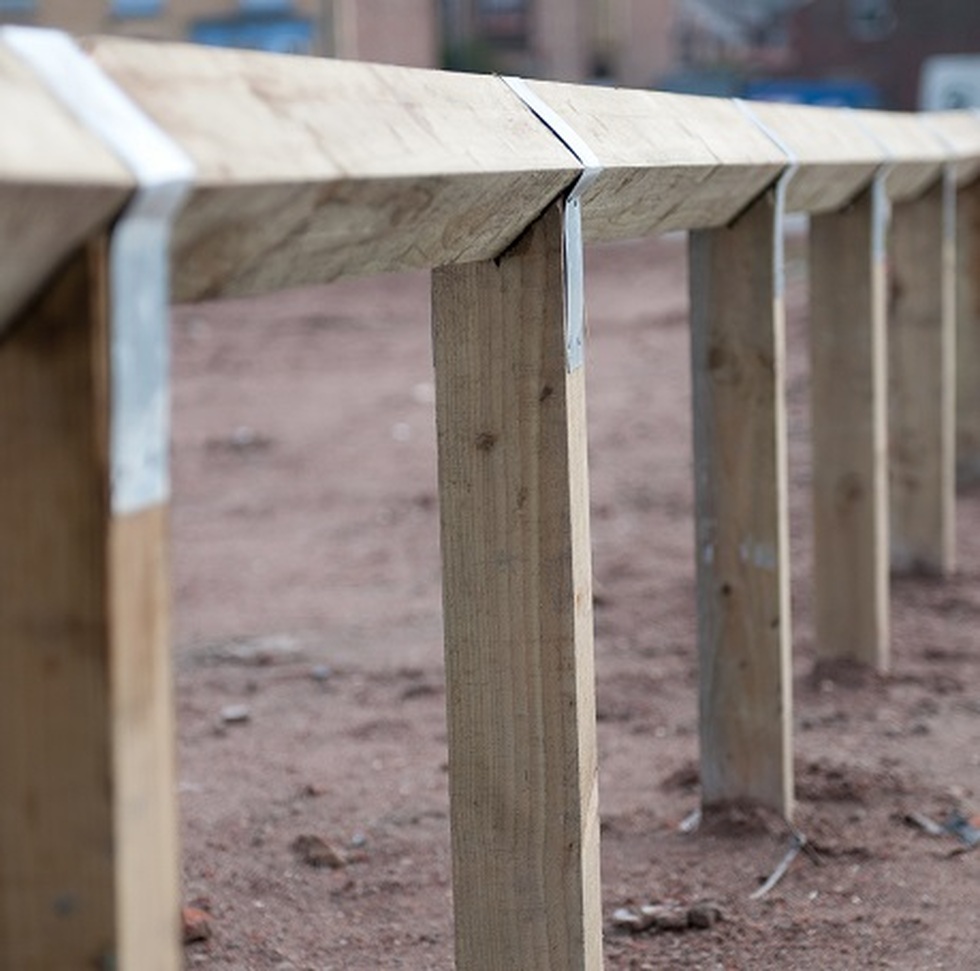 Knee rail fencing is a low level, unobtrusive form of post and rail fencing, commonly used in public places for the demarcation of areas or to manage foot traffic. For example you may have seen knee rail fencing in car parks or alongside footpaths where it may be used to protect flowerbeds or lawned areas.

The construction of knee rail fencing is very simple. Short square posts have a 'birdsmouth' or V-shaped notch cut into the top to enable a square top rail to sit at an angle. The top rail is fixed to the post with a  metal knee rail post strap, which is nailed on to the post to secure. Knee rail posts are most commonly concreted into position at up to 1.8m intervals to ensure a rigid, sturdy boundary.

Standard 100 x 100mm or 100 x 125mm UC4 fence timber is used to construct knee rail fencing, and  most of our branches have the facility to pre-cut the posts to size and to cut the birdsmouth notches.

For further advice about your fencing project don’t hesitate to speak to our fencing experts at your local AVS Fencing & Landscaping Supplies branch. Our ranges of high quality post and rail fencing componentry are all available either to click and collect from your local AVS Branch or for home delivery within our AVS Branch delivery area.